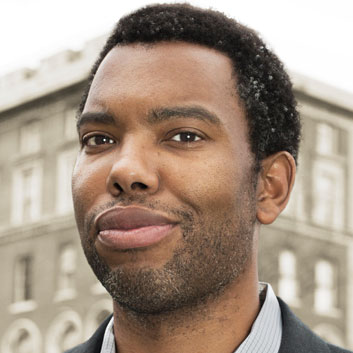 Ta-Nehisi Coates is one of the most original and perceptive black voices today—“the single best writer on the subject of race in the United States” (New York Observer). Coates is the author, most recently, of Between the World and Me, the #1 New York Times bestseller that “will be hailed as a classic of our time” (Publishers Weekly) and which Toni Morrison calls “required reading.” Between the World and Me is written by Ta-Nehisi Coates in the form of a letter to his teenage son, Samori. In 160 pages, it moves from Baltimore to Howard University to New York City to Paris, France, addressing what it means to be black in America. Slate calls it, “a book destined to remain on store shelves, bedside tables, and high school and college syllabi long after its author or any of us have left this Earth.” An Atlantic National Correspondent, Coates has written many influential articles, including “The Case for Reparations,” which reignited the long-dormant conversation of how to repay African-Americans for a system of institutional racism that’s robbed them of wealth and success for generations. New York called the George Polk Award-winning cover story “probably the most discussed magazine piece of the Obama era.” More recently, The Atlantic cover story “My President was Black,” Ta-Nehisi’s reflection of President Obama’s time in office, has generated wide acclaim. Coates’s debut book, The Beautiful Struggle, is a tough and touching memoir of growing up in Baltimore during the age of crack. In 2012, Coates was awarded the Hillman Prize for Opinion and Analysis Journalism. Judge Hendrik Hertzberg, of The New Yorker, wrote, “Coates is one of the most elegant and sharp observers of race in America. He is an upholder of universal values, a brave and compassionate writer who challenges his readers to transcend narrow self-definitions and focus on shared humanity.” A former Village Voice writer, Coates has previously served as the Journalist in Residence at the School of Journalism at CUNY and the Martin Luther King Visiting Associate Professor at MIT. He has been awarded the Hillman Prize for Opinion and Analysis Journalism. He is the winner of a 2015 MacArthur Fellowship, and was named one of TIME Magazine’s 100 Most Influential People.