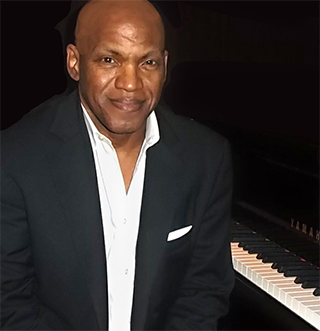 “His vocal style doesn’t remind me of anybody else either plus he’s written all the music, lyrics and arrangements himself – accomplished…” continues Soul Music HQ about David’s vocal and composition prowess, which began with formal musical training at Tennessee State University in Nashville, Tennessee. It was there that David began performing professionally with “The Montclair’s,” a vocal group based out of St. Louis, Missouri. That R&B group enjoyed a string of regional hits with lead singer Phil Perry going on to enjoy a successful solo career.

David is also the musical director for Rock & Roll Hall of Famers, The Impressions, where his arranging and composition skills were showcased when in 2007 The Impressions celebrated 50 years in the entertainment business with a sold-out concert backed by The Chattanooga Symphony Orchestra. David’s arrangements of the Curtis Mayfield songbook reverberated throughout the Tivoli Theatre Performance Hall. David has shared the stage with a number of different artists and continues to perform solo, and with his band, The Gentlemen’s Jazz Quartet. His musical journey continues.