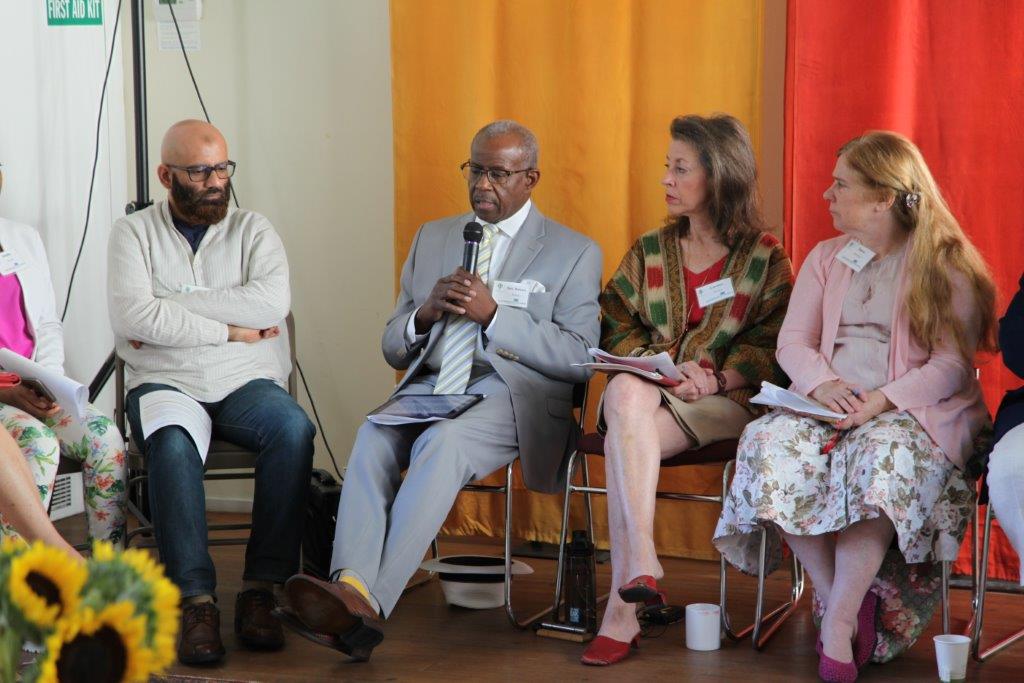 Restoring Wholeness:
Within Ourselves, with Each Other, and the Vast Community of Life

Global Peace Initiative of Women (GPIW) and The Sophia Institute (TSI) jointly sponsored, for the second time, Global Contemplative Alliance Convocation in Charleston in June of 2017, Restoring Wholeness within Ourselves, Each Other, and the Vast Community of Life with Contemplative Alliance of Charleston. Participants explored how to foster the sense of unity in each of us, the sense of belonging, and of connection to the “other” in order to expand our realization to know our interconnection with other life forms and all of the earth. This awareness is crucial as we address social justice and care and protection of all people in Charleston and move into a future of unknown climate shifts and ecological instability.

GPIW held this conference in Charleston because they wanted to learn from Charleston’s experiences following the tragedy at Mother Emanuel, and because of Charleston’s fragile environmental status at sea level on the coast of the Atlantic. Buffeted as we have been by hurricanes and floods over the past three years, we are at ground zero for sea level rise and environmental disasters.  Members of Social Justice Racial Equity Collaborative (SJREC) were invited to be part of the program and to offer reflections including the Reverend Nelson B. Rivers, III, former head of NAACP and one of the inaugural Living Your Truth speakers, Melissa Maddox Evans, CEO of Housing Authority, (both from our leadership team for SJREC), Muhiyyidin d’baha, (Charleston leader of Black Lives Matter), Cookie Washington, (artist and social activist, who was TSI 2017 Grimke Award winner), Heather Lyn Mann who spoke to our spiritual ecology work along with the Reverend Bert Keller and Cathryn Zommer from Higher Ground- rising to meet our environmental crisis,  Kathleen Sullivan from TSI’s Board and other locals from Contemplative Alliance Charleston, also shared their reflections with the Global Contemplative Alliance.

(The first collaboration with GPIW was in November of 2014, The Awakening Heart: Caring and Protecting Earth’s Community of Life).

This was an intergenerational conversation between the local community of Charleston and thought leaders from contemplative communities around the USA about how to restore unity to our increasingly polarized world.

So much of the suffering in today’s world emerges from the sense of separateness that we have imagined as a reality, a sense of being cut off from our own inner being as well as from the external world.  Based on this assumption what happens to the “other” and to the natural world does not affect us. But this separateness is an illusion. If we knew the reality of interconnection and interdependence, we would not treat others as separate from ourselves, we would not treat the natural world as apart from ourselves. We would know that each of us is part of a universal whole, each is a microcosm containing the full beauty of the macrocosm – we are reflections of a grander totality.

We talk much today about interconnection but do we really live this reality? How do we cut through the illusion of separateness and restore this sense of wholeness, which is the only way to provide true security in a fast changing world?  These are the main questions for exploration during this two day community conversation.

The diverse group of 33 participants included experts in the social justice and ecology fields, artists, practitioners of the Buddhist, Baha’i, Christian, Indigenous, Muslim, and Yogic spiritual traditions, as well as thought leaders in progressive community development.

The gathering was opened by SJREC Leadership Team member Rev. Nelson B. Rivers, III, a pastor and renowned community advocate and leading organizer of the largest civil rights demonstration (50,000 people) in the history of South Carolina.  Rev. Nelson’s statement framed the context of the group discussion on the racial divide in America and the impact of white privilege lived out in institutionalized racism. His candid reflection opened the participants to discuss the unconscious nuances of racism that require action in the realm of racial equity and justice, not merely acceptance and diversity.

The discussion addressed that inclusion does not change attitudes and behaviors that perpetuate oppression, and it does not deconstruct or confront the framework of systemic privilege still in place.  Instead, many in the group called for individuals to take individual responsibility in telling the truth about the impact of slavery as a business and industry in America.  This includes shedding light on the ways, even generations later, it continues to benefit a particular sector of society. The long term impact perpetuates economic, social and educational disparities that infringe on the human rights and civil liberties of others.

Rev. Rivers is part of the Leadership Team of the Charleston based Social Justice Racial Equity Collaborative, an initiative that was formed in response to the tragic act of terror targeting the AME Mother Emanuel church in June 2015.  The Charleston action group is currently developing work around truth, racial healing, and transformation and strategies for policy improvement for people of color in the areas of education, policing, gun violence prevention, healthcare, housing, economic justice, and expansion of voting rights and democracy.

The Contemplative Alliance/GPIW partner in Charleston, the Sophia Institute, is under the directorship of Carolyn Rivers.  Ms. Rivers is a co-chair and convener of the Social Justice Racial Equity Collaborative and has been a leading example of bridge building. She engages the community in the processes of personal inquiry and deep listening required for healing from historical trauma.  Uncovering hidden truths around race and actively pursuing personal transformation are the key qualities — addressed in the dialogue — that effectively uproot cycles of inner and outer violence that continue endemic injustices.

The dialogue also identified some of the underlying problems to progress in Restoring Wholeness.  This included acknowledging that the habitual response of society is to denounce major events around violence to the earth and humanity at the inception, but then quickly losing attention. They also agreed there remains a stasis in the collective to move out of the destructive conditioning that has systematically targeted and destroyed lineages and communities throughout generations in America.  This explained the honest feelings of fatigue and non-forgiveness expressed by some in the group in response to the AME Mother Emanuel massacre.  Cookie Washington, a Charleston community leader and artist shared: “I can forgive the shooter, but I cannot forgive the society that created him.”

Muhiyyidin d’baha, a Cultural Synergist and leading youth voice from Charleston offered that ending inter-human violence begins with recognizing the anger and frustration that arises in response to targeted oppression.  This includes making the invisible seen, such as finally seeing the young black male presence that societal narratives have written off as “non-existent”.  Discussion of the prison industrial complex arose as one of the prime examples of how this reality plays out.  His insights offered a way forward for contemplatives and non-contemplatives to elevate individual mindsets to begin the process of ending unconscious patterns that facilitate systems of oppression.  He shared:

“We don’t live in the same society with each other.  We might not even know how to react to one another.  There is a lack of public display of anger, but that is not the reality.  There is a lot of anger.  It is crucial to have rituals so that we don’t internalize repression.”

“Since [June 2015] we have birthed a wonderful voice among young activists.  It is a catharsis.  This is a process of reclaiming power and dignity.  For us to come into our sense of dignity we have to say ‘no more’.  We have to refute ideologies that don’t allow the common good to flourish.  It’s going to take a generation that doesn’t have a visceral trauma.”

Speaking to the importance of ritual and contemplative traditions in changing societal attitudes, Adam Bucko, a seminarian in training and Founder of the Reciprocity Foundation serving homeless youth in NYC said that Standing Rock was a sacred arising where people discovered again ritual, prayer, and tradition.  Reflecting on his friends on the ground during the protests in the Dakotas, he said “Everything that was happening was related to and shared in ancient practices.  There was leadership in Standing Rock that came from Native elders.  The specificity of the activities reoriented their activism.”

Looking at examples of new ways forward, the program included thriving examples of actions in Charleston that promote greater human unity and balance with the earth.  One such effort is the Enough Pie organization addressing the displacement of a long-standing unified community presence in the Upper Peninsula.  Co-Founded by Cathryn Zommer, Enough Pie’s work uses creative art outlets, diversity inclusion, and raising the presence and profiles of local businesses original to the area to connect and empower an already thriving community from the pressures of gentrification.

Another initiative was by Heather Lynn Mann, a contemplative ecologist and a new resident of Charleston.  She is raising awareness of the impact of rising tides, due to global warming, on the entire city.  Statistics state that 25% of the city could be under water all the time, based on the carbon already in the atmosphere.  If Charleston stops putting carbon into the atmosphere immediately, there is chance to save 50% of the city from flooding.  Her presentation echoed the reality that climate change will affect the most vulnerable first, but ultimately it will affect everyone.  Addressing the Restoring Wholeness program theme, Heather emphasized the importance of unification among those engaged in the process of combating environmental challenges.  She said, “We cannot fool ourselves that the fight for climate change is peaceful work because those who are opposed aren’t peaceful.  We have to be strategic.”

Reflecting on her work with Thich Nhat Hanh’s Earth Holder Sangha, she reminded us that if humanity adopted a plant based diet we would stop climate change in its tracks.  Few want to acknowledge that industrial farming of animals is one of the leading causes of climate change.

The gathering in its entirety surmised — be it confronting racial divides or stemming ecological degradation — that the key for the next stage of evolution is about stepping outside oneself and connecting to the greater whole in order to manifest the unity and harmony we seek, personally or collectively, in order to truly Restore Wholeness. 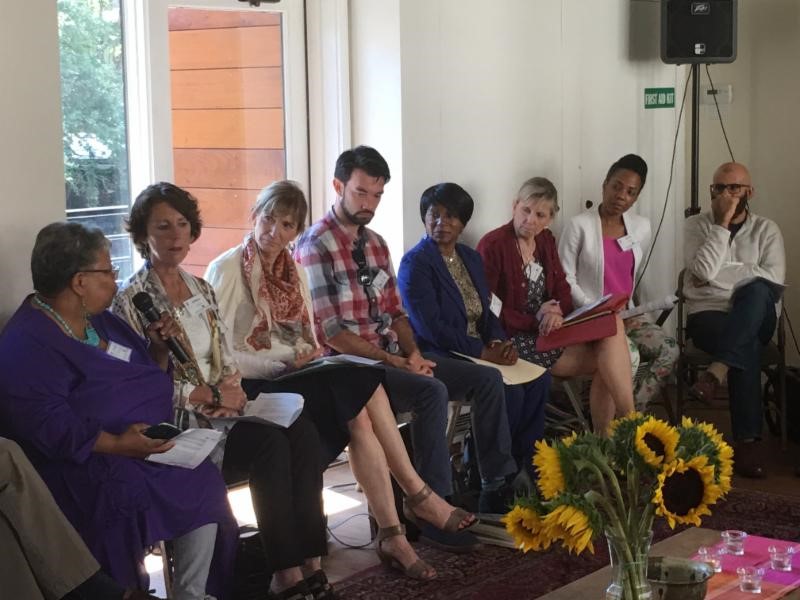 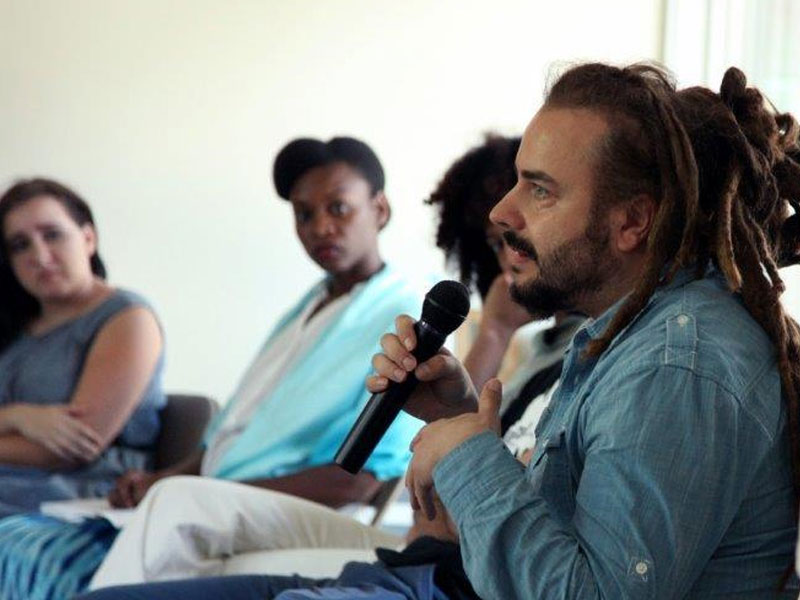