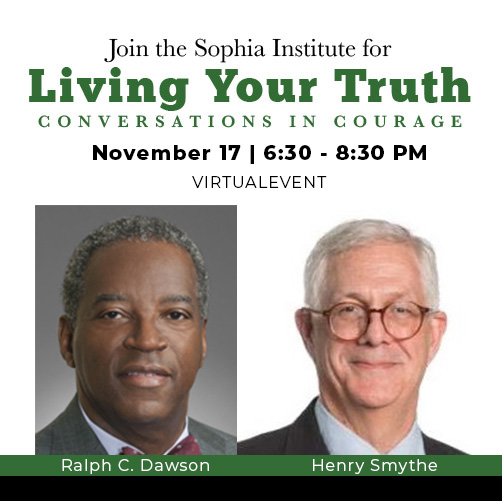 Living Your Truth with Ralph Dawson and Henry Smythe

Ralph C. Dawson – Ralph is a native of Charleston, South Carolina, where he grew up as one of 12 children on the eastside. He attended various segregated public schools, graduating from C. A. Brown High School with honors in 1966. At Brown, he and some friends formed a social club called the “Corsairs,” a group of nine guys mentored by its then 22-year old teacher/advisor, Jim Clyburn; among that nine was the first African-American to graduate from the Citadel, and the first African-Americans from Charleston to Graduate from Harvard and from Yale. In the summer of 1966, Ralph was introduced to a Yale Admissions officer by a then guidance counselor, Lucille Whipper; the Admissions officer invited Ralph, who was about to attend Morehouse College, to participate in a new program at Yale for talented youth from low income backgrounds called the Transitional Year Program (“TYP”). He accepted a position in TYP along with 42 other students and, upon completion of the year, he was one of the four students admitted to Yale College on a full scholarship.

Ralph enjoyed and participated in the stimulating academic environment at Yale, and he also became a campus activist, participating in the establishment of the first African-American Studies Major at a leading American institution. He was also the leader of the Black Student Alliance at Yale (“BSAY”) during the tumultuous period known as “May Day 1970,” when New Haven, Connecticut and Yale were the site of a major murder trial involving the Black Panther Party, and a series of protests against the Vietnam War. The BSAY played a crucial role in keeping the peace on the campus, generating support for the conduct of a fair trial for the Black Panthers, and encouraging Yale to embrace its civic responsibilities to the New Haven Community.

Ralph graduated from Columbia University School of Law in 1976, having served as an Editor of its Human Rights Law Review, and studied with many outstanding students, including the woman he would marry, Leslie Demus, and Eric Holder, the first Black Attorney General of the United States. Ralph has practiced law for over 40 years. He is a Retired Partner in the international law firm of Norton Rose Fulbright, formerly Fulbright & Jaworski, and remains Of Counsel to that firm, specializing in Labor and Employment law, and Civil litigation, and has represented clients in courts and administrative agencies throughout the United States. Ralph has perennially received the top rating from Martindale Hubbell, the leading rating agency for attorneys, and has been recognized by his peers as a “Super Lawyer” in the New York area. He has also held leadership positions in important committees of the Bar, such as the Disciplinary Committee of the First Judicial Department in New York, and the Merit Selection Panel for Magistrate Judges in the Southern District of New York. He also serves as the court appointed Receiver tasked to recover, preserve and distribute the assets of Ascot Partners, one of the feeder funds which lost over $1 billion in the Madoff Ponzi Scheme. He has recovered and distributed almost $300 million to Ascot investors.

Ralph is politically active. He served as a Senior Advisor to the Howard Dean Campaign for President in the 2004 election cycle, and worked on Dean’s election as Chairman of the Dawson Bio – Personal.docx – 2 – Democratic National Committee (“DNC”) in 2005. He was appointed to the DNC by Dean, his college roommate, and assisted Dean in the implementation of his acclaimed “50 State Strategy” to rebuild the Democratic Party, which helped the party gain control of both Houses of the Congress and the Presidency in the 2008 election. As a member of its Rules and Bylaws Committee, he played a key role in the decision to designate South Carolina as one of the four states to hold early primaries in the Democratic Party’s Presidential election process. He was a “Super Delegate” to the Democratic National Convention from 2008 to 2016 , and appeared as a DNC member on numerous programs such as the Lehrer News Hour, the CBS Evening News, and MSNBC. Ralph played a prominent role in resolving disputes over the effect of primaries held in Florida and Michigan in violation of Democratic Party Rules. He endorsed Senator Barack Obama for President and served as Chair of the African-American Leadership Council of the Democratic National Committee in the 2008 election cycle.

Henry B. Smythe is a trial lawyer with 40 years of experience representing major corporations in complex litigation in the areas of product liability defense, mass tort defense, class action, and multidistrict litigation.  Admitted to the South Carolina Bar in 1977, Smythe received his Bachelor of Arts from Yale University in 1970  and his Juris Doctor from the University of Virginia in 1976.  His clients range from major national and regional companies to locally owned concerns, in court cases in both the state and federal systems.  Other work includes representing automobile service companies in personal injury matters as well as corporations and individual clients in business litigation matters.

With an AV rating by the Martin Hubbell Law Directory, Smythe has been named as a Leader in his field of Litigation by Chambers USA as well as Defendants Lawyer of the Year in 2013 by The Best Lawyers in America.  He is a member of the American Bar Association and the South Carolina Bar Association where he has served as a past president.  A certified mediator, he is a member in the Product Liability Advisory Council, Sport and Fitness Industry Association, American Board of Trial Advocates, American Counsel Association, Defense Research Institute-Products Section, Litigation Counsel of America, SC Defense Trial Attorneys Association, and World’s Leading Product Liability Lawyers.

A former Charleston City Council member from 1992-1996, Smythe currently serves on the Board of Directors of the International African American Museum and the Saul Alexander Foundation.  He served as the President of the Board of Directors of the Coastal Community Foundation from 1988-1991, where he was a board member from 1985-1991 and 1999-2005.  He has also served on the boards of the College of Charleston Foundation and Spoleto Festival, USA.  A member of the Leadership South Carolina Class of 1982, he also served as the Town Attorney for the Town of Sullivan’s Island from 1977-1978.

Free Event, but you must register by noon on Friday, November 17th